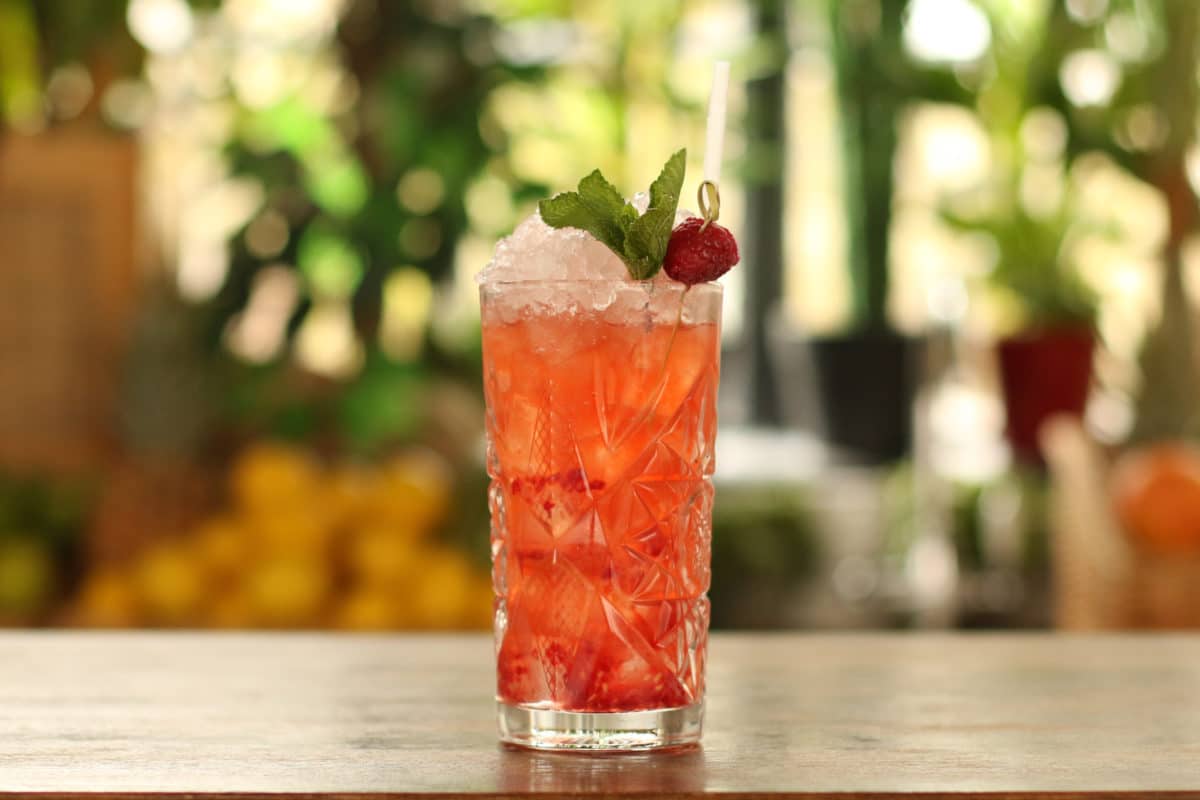 Take your high-ball glass and add your raspberries to the bottom.

Using the Jigger to measure, add the bourbon, cranberry juice and lime juice.

Use the back of your bar spoon to lightly crush the raspberries and stir them into the other ingredients.

Fill the glass halfway with cubed ice and stir for a couple of seconds to cool the drink and incorporate the ice.

Fill the remaining space in the glass with crushed ice.

Carefully drizzle the Chambord over the crushed ice, into the cocktail.

Garnish with a raspberry and a small mint sprig and serve with a straw.

The Eclipse belongs to a family of cocktails known as ‘coolers’. Punch defines a cooler as a ‘catch-all term for a broad swath of drinks made by mixing spirit or fortified wine with a carbonated beverage, served over and often garnished with fruit.” But the addition of soda water doesn’t seem to be an essential element of a cooler.

Harry Craddock’s Savoy Cocktail Book features a page on coolers but as usual, Craddock gives little to no information on what defines this family of drinks. Of the five recipes featured in Craddock’s guide four of them do include soda water but one of them leaves it out, the only thing that seems consistent between all five drinks is that they are served long in a ‘high-ball’ glass over ice.

In modern times, any long drink containing liquor and fruit juice can be called a cooler. In America there are also many companies which produce pre-packaged ‘wine-coolers’ these tend to be a fairly low-alcohol mixture of fruit juice and wine or malt liquor. Due to the association with juicy, low-alcohol drinks the term cooler is also sometimes used to describe alcopops.

Being such a modern cocktail there is little myth or controversy surrounding the Eclipse Cooler. It does however, help dispel the age-old myth that whiskey can’t be mixed with fruit. Whiskey drinkers tend to be some of the most opinionated and fussy of the alcohol enthusiasts and every whiskey connoisseur has their preferred way of drinking, which they will swear is ‘the only right way to enjoy whiskey.’ Cocktails are all about creativity and experimentation though and the Eclipse Cooler is great example of why it is sometimes best to ignore the traditional approaches to liquor and try something new. Whilst many whiskey drinkers would turn their nose up to the idea of this cocktail, when trying it they’re often surprised to find how enjoyable it is.

The Eclipse also helps to disprove some of the common misconceptions held by those who ‘hate whiskey’, its fairly common for drinkers to be put off by whiskey and whiskey based cocktails as they often associate the spirit with the strong peaty flavour of Islay scotches or the old fashioned, masculine connotations afforded to it by shows like Mad Men. The Eclipse showcases a light and fruity way to drink this spirit that may see some whiskey haters converted.

Being such a modern cocktail there is little myth or controversy surrounding the Eclipse Cooler. It does however, help dispel the age-old myth that whiskey can’t be mixed with fruit.