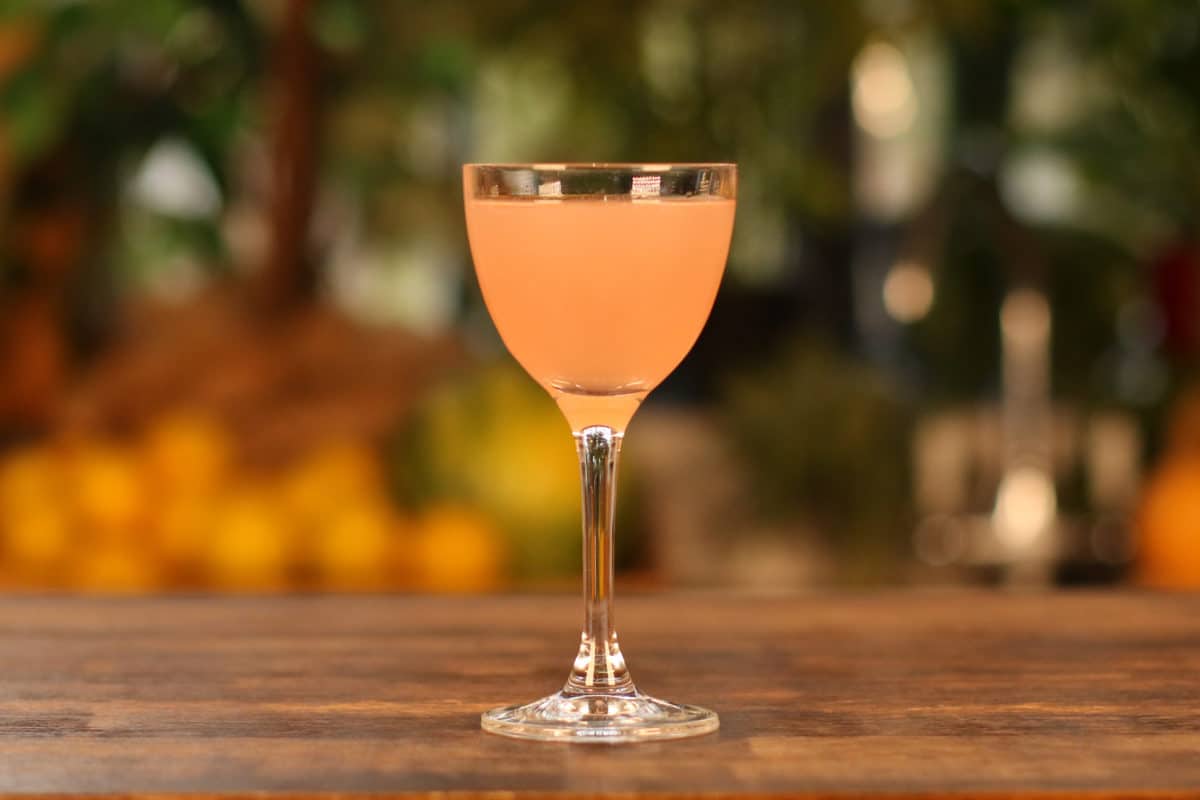 The classic mixture of vodka, lime juice, cranberry and triple sec is world-famous thanks to its starring role in Sex and The City and has more than enough balance and flavour to live up to its hype.

Take your Boston glass or small tin and, using your jigger to measure, add the vodka, triple sec and cranberry juice to the shaker.

Using your Mexican elbow and your jigger to measure, squeeze 25ml of lime juice and add it to the shaker.

Using your Hawthorne strainer and your fine strainer, double strain the cocktail into your chilled martini glass or coupette.

Take a thick piece of orange peel and pinch it, skin-side facing out, over the flame of your lighter to create a sparkly effect.

Like so many famous classics the Cosmopolitan’s history is muddy and seeped in speculation. Some accounts state that the drink was first created as part of a marketing ploy by Absolut vodka to sell their new ‘Absolut Citron’, lemon-flavoured vodka. Hoping to market the spirit primarily to women, Absolut approached female bartenders in Miami enlisting them to create a girly cocktail featuring the product. In the mid 1980’s they came across bartender Cheryl Cook, who was working the stick at South Beach’s Strand Restaurant. Of her creation of the drink Cook remarked:

“What overwhelmed me was the number of people who ordered Martinis just to be seen with a Martini glass in their hand. It was on this realization that gave me the idea to create a drink that everyone could palate and was visually stunning in that classic glass. This is what the Cosmo was based on.”

Cook’s original recipe called for Rose’s lime cordial rather than fresh lime juice. When the drink eventually made its way to New York, the recipe was tweaked by celebrated bartender Toby Cecchini who first introduced fresh lime and created the version most widely drunk today.

The Cosmopolitan also bears a striking resemblance to a much older cocktail of the same name which was featured in Charles Christopher Murphy’s 1934 edition of Pioneers of Mixing at Elite Bars. Murphy’s recipe calls for 3 parts gin, 1 part triple sec, 2 parts lemon juice and a dash of raspberry syrup. This drink is a twist on a classic Daisy and would certainly have resembled the modern Cosmo both in colour and taste.

There are many conflicting accounts of how the Cosmopolitan came into existence.As well as the stories behind this drink which we’ve already mentioned, there are a number of claims to the cocktail’s creation. One account credits the Cosmo’s popularity to the gay community of Provincetown, Massachusetts. Yet another claim to this drink is attributed to bartender, Neal Murray, who suggests that he invented the drink while working at Minneapolis steakhouse Cork & Cleaver in 1975. Apparently, Murray created the drink when he added a splash of cranberry juice to a ‘Kamikaze’ and upon first taste, a customer declared: “How Cosmopolitan” which supposedly led to the cocktail’s name. These are just a few of the many contradictory stories surrounding the Cosmopolitan’s invention and no one is sure of how exactly this cocktail came into being but despite that, the Cosmo is a world renowned and ever-popular drink.

The Cosmopolita bears a striking resemblance to a much older cocktail of the same name which was featured in Charles Christopher Murphy’s 1934 edition of Pioneers of Mixing at Elite Bars. Murphy’s recipe calls for 3 parts gin, 1 part triple sec, 2 parts lemon juice and a dash of raspberry syrup. This drink is a twist on a classic Daisy and would certainly have resembled the modern Cosmo both in colour and taste.