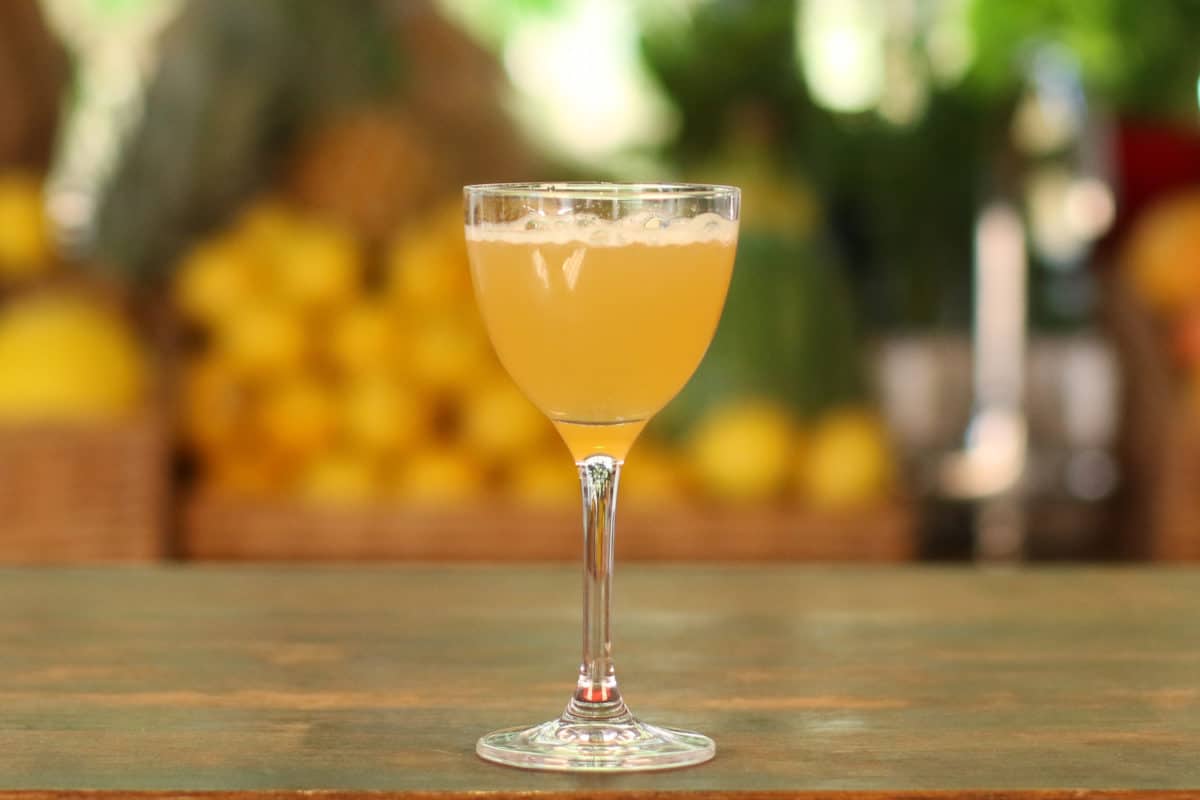 This twist on the classic sidecar uses pear brandy in place of the usual cognac and pear liqueur in place of triple sec to make for a deliciously dry and crisp, sour-style cocktail. The Pear Sidecar is an elegant and fruity spin on an old French favourite and a gorgeous addition to any mobile bar hire.

The Pear Sidecar is nearly as classic as its more famous forebear and whilst you’d be forgiven for thinking a fruit-forward version of this 20’s sour might discard the zesty balance and warmth of the original, in favour of sickly sweet artificial flavours, in fact this version has all the poise and depth of its celebrated cousin.

Whilst brandy is most often associated with grapes, the term brandy can actually be applied to any high proof spirit made primarily from fruit, brandy has long been made from a whole host of fruits including apples, to make calvados or applejack as well as from cherries and of course pears. Far from being an artificially flavoured, sweetened liqueur, pear brandy is a rich and complex spirit in its own right and fantastic ingredient to use in place of traditional brandy or cognac.

The Sidecar belongs to the sour family of cocktails, balancing the strong warmth of liquor with the tart acidity of fresh citrus (in this case lemon juice) and the sweetness of sugar or flavoured syrup. The Sidecar and its variants forgo the usual syrup for a granulated sugar rim, this peculiar method of sweetening the cocktail allows the drinker to control how sweet or tart their drink is with each sip.

The Pear Sidecar is an elegant and classic drink served in a Martini glass or coupette and sits beautifully alongside other classic cocktails, for those planning on serving this drink, you may want to consider featuring something like a Corpse Reviver No.2, this gin-based sour is flavoured with floral dry vermouth and a touch of absinthe, giving it a sweet herbaceous finish and an invigorating kick.

Classics like the Sidecar and the Corpse Reviver are short and fairly strong, to balance out a menu featuring these cocktails it’s worth considering serving a couple of longer, low ABV alternatives alongside them. Some great all-season long drinks include the Dark & Stormy, an equally refreshing and warming mix of rum, lime and ginger beer, and the floral Tom Collins, a classic high-ball of gin, lemon, sugar and soda.

If you’re considering serving a Pear Sidecar as part of your menu and want to know more about what drinks could work well with it, be sure to speak to your event organiser or check out some other cognac based, classic and sour-style cocktails from our list.

The history of the Sidecar is spread over three countries, France, England, and America. Its first written appearances came in 1922 in Harry McElhone’s ABC of  Mixing Cocktails.

Whilst the name of the bartender isn’t given it’s thought that it was created at Harry’s New York bar in Paris. The Sidecar was then later introduced to London by Pat MacGarry at London’s Bucks Club. Dale DeGroff has a different perspective on how the Sidecar was named:

The Sidecar’s invention is very much disputed, it could have been named for an American army captain who frequented Harry’s New York bar in Paris around 1920, using the motorcycle sidecar to take its name.

Others claim it could have been invented in New Orleans, making it one of the better cocktails to appear out of prohibition. The appearance of the Sidecar in written form first arrives in Harry MacElhorne’s Harry’s ABC of Mixing Cocktails and Robert Vermeire’s Cocktails: How to mix them.

This riff on the sidecar is centred around the classic clear French pear brandy, Poire William. Fruit brandies are prevalent across Europe, with almost every country having its own signature style, from Serbian plum slivovitz to Hungarian apricot palinka to Spanish apple calvados. Frances pear brandy or ‘eau de vie’ (water of life) is perhaps one of the most refined and revered of all the European fruit brandies. Esquire’s Jordan Hoffman wrote an in-depth article on fruit brandies, with particular praise for Poire Willam:

“Let me introduce what might be my all-time favorite fruit brandy. In the southern regions of France, like Provence and the place where that girl wandered around and froze in Agnes Varda’s movie Vagabond, you can get a high-proof pear-based liquor known as Poire William. (The William pear is the same as what we call a Bartlett pear.) Now, they serve this in some of the Western regions of Germany, too, but the French take the design level to near Rococo-levels. They wrap the bottles around budding pear trees, so the fruit can grow into the vessel. Then they pour the fermented spirit into these bottles. It makes for an outstanding bit of furniture art—that is if you can find any.”

One of our favourite pear-based cognacs is Xante, this pear liqueur has a base of French cognac which gives it a warm and well-rounded flavour, try using it in combination with Briottet’s Poire William liqueur for the ultimate Pear Sidecar.