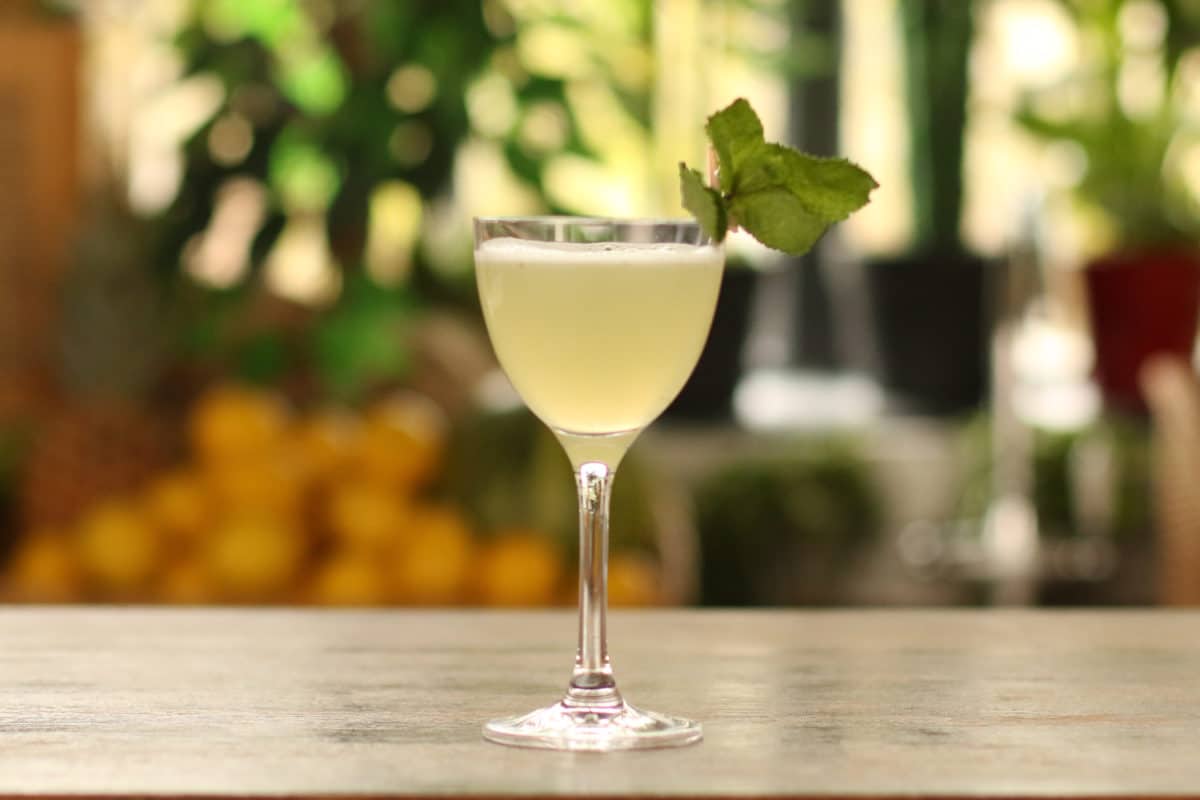 The South Side is one of those classic cocktails so old and so widely drunk that its origins are something of an enigma. Essentially a gin sour with some added mint, the first recorded recipes of the South Side listed it as a fizz. Today the South Side is generally served short: straight-up in a Martini glass or coupette, forgoing the addition of soda water which, when added, makes the drink a ‘South Side Fizz’. Either way, the balanced mixture of sour, bitter, sweet and minty makes for a refreshing and delicious cocktail.

When pairing the South Side with other cocktails you may want to consider some longer, more fruity gin drinks to go alongside it. Another great classic choice would be a Bramble, which combines gin, lemon and crème de mure (blackberry liqueur), with blackberries over ice.

For those who favour a smoother, less acidic cocktail, something like a Clover Club, which features raspberry syrup and egg white to make for a sweet and creamy drink, may be a perfect accompaniment to the sharper South Side. When considering your bar hire this may also be a good option as the Clover Club and the South Side utilise the same glassware, minimising the number of different glasses you may require.

You may want the South Side to be part of a mint-centric menu for your bar-hire. Mint is great cocktail ingredient and features in loads of classic drinks. Mojitos are a great minty classic as is the whiskey-based, Mint Julep. For an old-school, after-dinner cocktail using mint you might want to try a Grasshopper; this pre-prohibition cocktail features crème de menthe, crème de cacao and cream to make for a sweet and creamy digestif that tastes like an after-eight in a glass.

If you’re interested in creating a menu that includes the South Side, be sure to speak to your event organiser about your options or check out some other gin-based, minty or sour-style cocktails from our list.

Like so many old classics the story of the South Side is shrouded in mystery, more of which you can read about in the ‘History’ tab, but in terms of making the drink, the popularity and simplicity of the cocktail mean its method and recipe are pretty much agreed upon by most bartenders.

One myth that surrounds many mint drinks, and particularly those as classic as the South Side, is the need to muddle your mint. Many classic cocktail recipes call for this but most modern bartenders agree that when it comes to fresh herbs, a soft touch makes for a better drink. When muddled or bruised too heavily, mint can lose its luscious green colour and its sweet, zingy flavour and end up tasting bitter and looking sad and brown. A great motto to remember for mint is “bruise, don’t abuse”.

When adding mint to a stirred or muddled drink like a Mojito, holding the leaves in the palm of your hand and giving them a hard clap will sufficiently coax out the flavours and aromas. When adding mint to a shaken cocktail like a South Side, the ice and the action of shaking will bruise the leaves for you. Also, don’t forget to only use the leaves when including fresh herbs in your cocktails as the stems might make your drink taste bitter and woody.

References for this cocktail will be available soon.

As a sour, the South Side derives a lot of its flavour from the mint and lime juice, but that’s not to say that the gin isn’t important. A sweet, floral gin gives the cocktail a light, refreshing taste, and the more botanicals within the gin, the more complex the finish can be.

We use Broker’s gin for South Side. Broker’s uses a 200 year old recipe, combining 10 botanicals in a traditional copper still at their distillery near Birmingham. The smooth, subtle complexity of this award-winning gin bring a depth and sophistication to an already delicious cocktail.