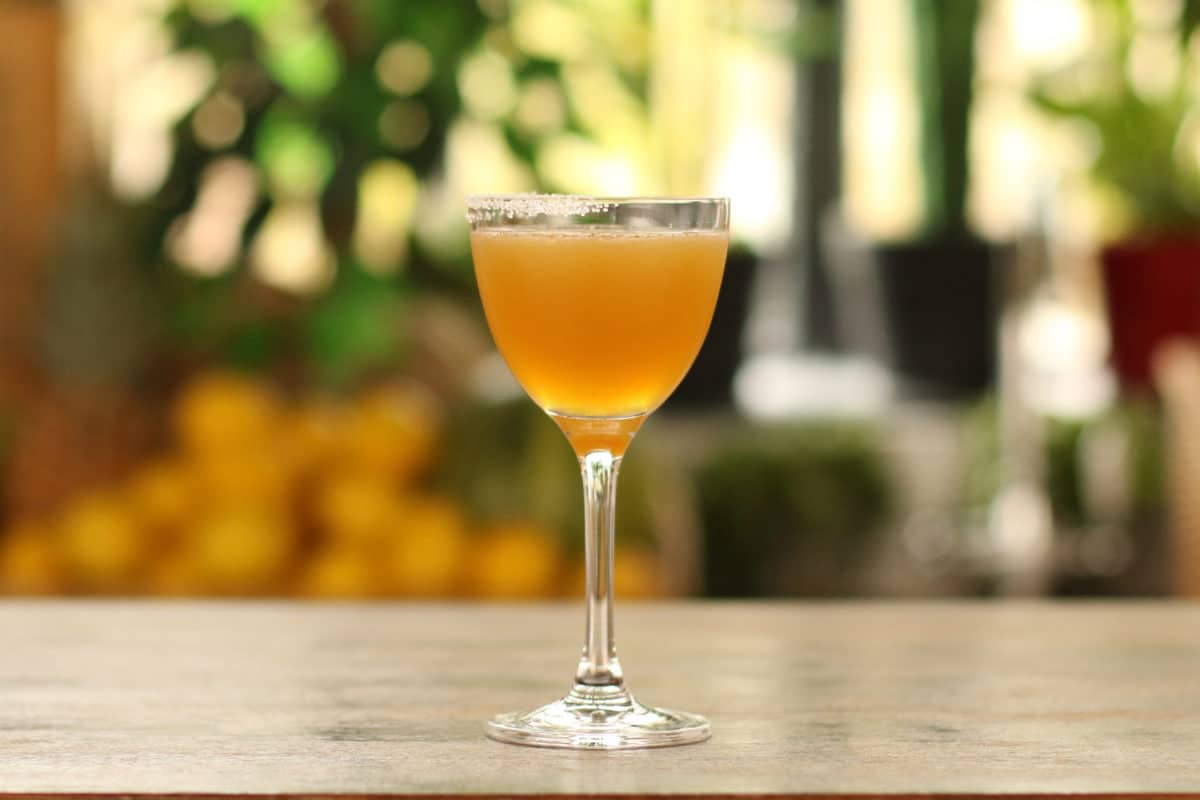 This French creation is a solid favourite among bartenders and serious drinkers but is a little overlooked by general punters. A simple mixture of cognac, triple sec and lemon juice with a sugar rim, the Sidecar is a balanced and delicious sour-style cocktail that has a rich warmth, a subtle sweetness and a sharp citrusy finish which make it a universally enjoyable drink and a great choice to include on a classically styled cocktail menu.

The Sidecar is a classic cocktail hailing from 1920’s Paris and was a favourite among the writers and artists that populated the city at the time.

The Sidecar may not be quite as well known as some of the other classic cocktails from this period but its simple and unique character have ensured it a firm spot in the cocktail canon. The most distinctive feature of this brandy-based sour is the quirky way in which it’s sweetened, unlike most sours which include sugar syrup or a sweet liqueur to balance them out, the Sidecar has a rim of demerara sugar which adds sweetness as well as texture to each sip.

The Sidecar is a great choice to feature on a menu styled around classic cocktails and there are loads of other traditional drinks which could accompany it; one of our favourite classics is the White Lady, this Savoy Cocktail Book creation is a simple sour of gin, lemon and triple sec, elevated to creamy fluffy new heights with the addition of egg whites. You may even want to try the White Lady’s fruity pink cousin, the Clover Club, which substitutes triple sec for grenadine and adds a raspberry garnish to make a fun and flavourful gin sour.

Classics certainly aren’t limited to gin, and for those who are fans of the darker spirits there are loads of great brandy, whiskey and rum cocktails from this era too. One particularly sophisticated classic, which features both cognac or brandy and rye whiskey, is the Sazerac; this New Orleans staple is a gently stirred mixture of the two spirits with a dash of Peychaud’s bitters served straight up in a glass washed with absinthe to give it a subtle herbaceous note and a rich spicy finish.

Many classic cocktails like Sidecar and the Sazerac are short and fairly strong, for those guests who prefer to drink something on the lighter side there are some lower ABV classics you could include too. The Tom Collins is an old favourite – a long drink, softened by the addition of soda water to gin, sugar and lemon juice. Another low ABV classic is the Americano; this aperitivo hails from Italy and has been a favourite for at least a century, a herbal, mildly bitter mixture of Campari, sweet vermouth and soda water which has a complex and pleasing flavour and is light enough to drink all night.

If you’re planning on serving the Sidecar as part of your menu and want to know more about what cocktails might sit well alongside it, be sure to speak to your event organiser about your options, or check out some other brandy based, classic and sour-style cocktails from our list.

Whilst the name of the bartender isn’t given it’s thought that it was created at Harry’s New York bar in Paris. The Sidecar was then later introduced to London by Pat MacGarry at London’s Bucks Club. Dale DeGroff has a different perspective on how the Sidecar was named: “

The word sidecar means something totally different in the world of the cocktail: if the bartender misses his mark on ingredient quantities so when he strains the drink into the serving glass there’s a bit left over in the shaker, he pours out that little extra into a shot glass on the side – that little glass is called a sidecar.”

Others claim it could have been invented in New Orleans, making it one of the better cocktails to appear out of prohibition. The appearance of the sidecar in written form first arrives in Harry MacElhorne’s Harry’s ABC of Mixing Cocktails (1919) and Robert Vermeire’s Cocktails: How To Mix Them (1922).

Writing for The Alcohol Professor, drinks journalist Brian Petro detailed the origins of this famous cocktail:

“The parent of the Sidecar is the Brandy Crusta, a cocktail that has its roots in New Orleans. In the 19th century, there was a very specific definition for what made a cocktail; it was a blend of spirits, water, sugar, and bitters. The innovative leap that was taken in the Crusta was two-fold; there was a fancy sugar rim (as noted by Jerry Thomas in How to Mix Drinks) and the addition of lemon to the glass. Citrus wasn’t commonly used in drinks in the mid-19th Century, unless you were a sailor trying to avoid scurvy.”

We recommend using H by Hine for the Brandy and Pierre Ferrand Orange Curacao for the triple sec.