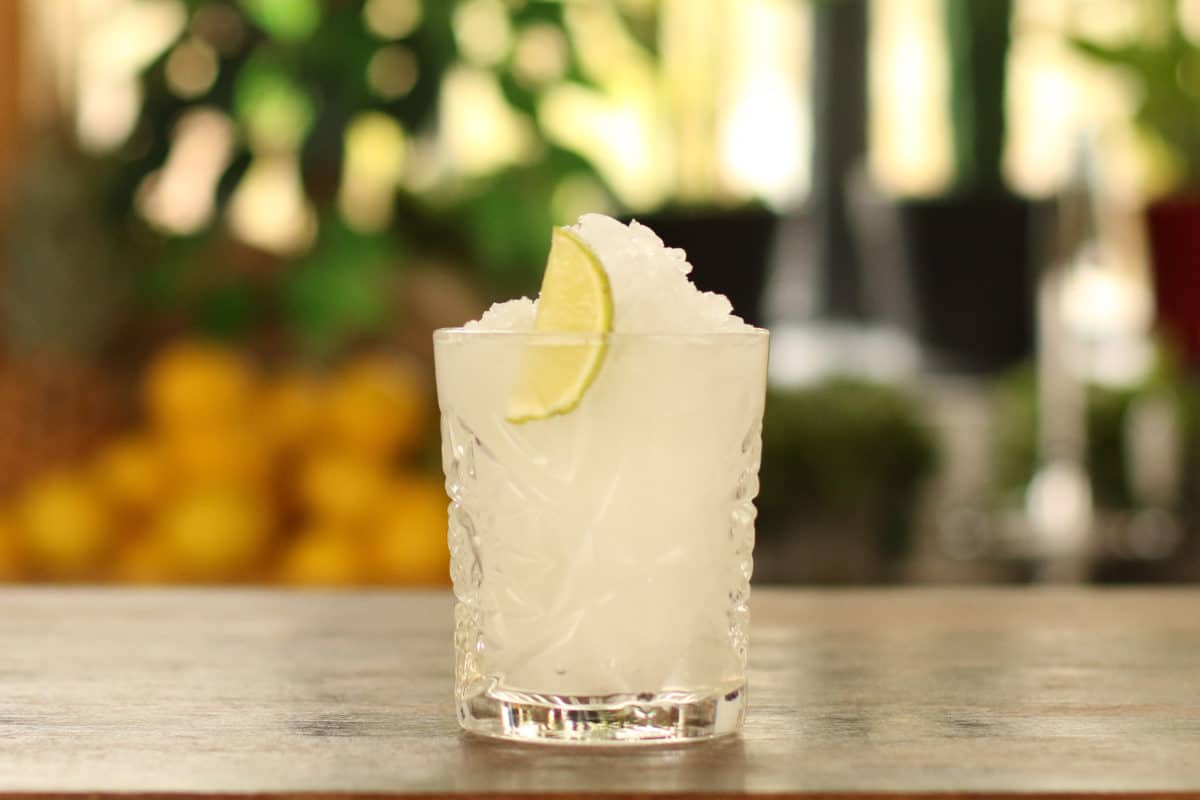 Tequila, lime juice and triple sec, together these three ingredients create one of the all time cocktail greats: the Margarita, combine them with crushed ice and a little sugar, in a blender, and you have the ultimate summertime slushie: the Frozen Margarita. This frozen cocktail is the perfect way to cool down on a sticky, summer afternoon.

A fun but classic twist on an original Margarita, this recipe simply requires the usual ingredients (tequila, triple sec and lime) be combined in a blender with crushed ice to create a summery, grown-up slushie.

Sugar is usually added to the frozen version of this cocktail to turn it into a sweeter drink than its more savoury older brother. This is the perfect cocktail for anyone planning a summer-time mobile bar hire or for those who are eager to design a tequila based menu.

A Frozen Maragarita is the ultimate summer thirst quencher, cold, zingy and packing a healthy tequila punch, it’s sure to go down well at any event. For those hoping to showcase agave based spirits, this a great cocktail for the less seasoned drinkers among your guests and the perfect way to introduce people to tequila.

This drink does require a blender to make, so if you’re hoping to include it on your menu be aware that it will need a power source and it may not be quite as quick to produce as some of our other options. You may want to pair it with some simpler cocktails to help regulate the speed of service. Another great beginner tequila cocktail is the Tommy’s Margarita; a mild version of the original that uses the natural sweetener, agave syrup, to round out the sharp notes of the tequila and lime, this drink is not only quick and simple, but incredibly moreish too.

For those who are including a Frozen Margarita on their cocktail menu, you may want to add some other blended drinks as well. There are loads of fun cocktails made in a blender and if you already have the equipment on site there’s no reason not to try some of these alternatives. One particularly popular blended cocktail is the Batida, this Brazilian drink mixes cachaça (a Brazilian spirit distilled from sugar cane) with fresh fruit and condensed milk to make a tropical, boozy milkshake.

If you’re interested in featuring a Frozen Margarita on your cocktail menu and want to know more about what drinks might work well alongside it, be sure to speak to your event organiser about your options, or check out some other tequila based, summery and blended cocktails from our list.

According to cocktail historian David Wondrich, author of Imbibe!, best guess is that the margarita as we know and love it evolved from a cocktail known as the “daisy.” This, a mix of alcohol, citrus juice, and grenadine served over shaved ice, was popular during the 1930s and 40s. There were gin daisies and whiskey daisies and, eventually, inevitably, tequila daisies, the original recipe for which called for tequila, orange liqueur, lime juice, and a splash of soda. At some point, this Mexican-influenced daisy became known by its Spanish name, margarita, which means daisy in Spanish. According to the Oxford English Dictionary, margarita—meaning “a cocktail made with tequila and citrus fruit juice”—first appeared in print in English in 1965, though other sources point out that margaritas were popping up in Jose Cuervo ads as early as 1945.

Nobody is entirely sure when the Margarita was first created, we do know that various forms of it have been around since at least the early 1930’s probably somewhere in America. With Mexico not having a huge cocktail culture it is unlikely the cocktail originated there, however during prohibition, rich American socialites would often cross the border to Mexico to drink legally so it is possible that the cocktail was created by an American Bartender in a bar filled with rich Americans,  but in a Mexican resort.

Vinepair.com as a bit to say about the frozen margarita…

‘Moreover, frozen margaritas seem a world away from true Mexican culture – and they are. Like Margarita Sames, the inventor of the world’s first frozen margarita machine was from Dallas. His name was Mariano Martinez, a restaurateur who, in 1971, created the fuel for spring break parties everywhere. In 2005, the Smithsonian’s National Museum of American History decided to acquire the machine.’

Because tequila is a domain protected product, meaning it has to be made in one of a few specific locations in Mexico, producers maximise their output by mixing their cheaper tequila, in almost equal parts with sugar-based neutral spirits, this is what gives mixto tequilas their harsh, artificial flavour.

Thankfully good tequila is becoming more readily available every year and there are now a huge range of affordable, high quality, 100% agave tequilas available. When making tequila cocktails a good blanco tequila works well—blanco tequila is unaged and the most inexpensive option, but it still has a grassy, citrusy flavour with a sweet undertone.

For a richer, more complex cocktail you could use reposado or ‘rested’ tequila—reposado is gold in colour from being aged up to a year in a wooden barrel and has a richer more robust flavour.