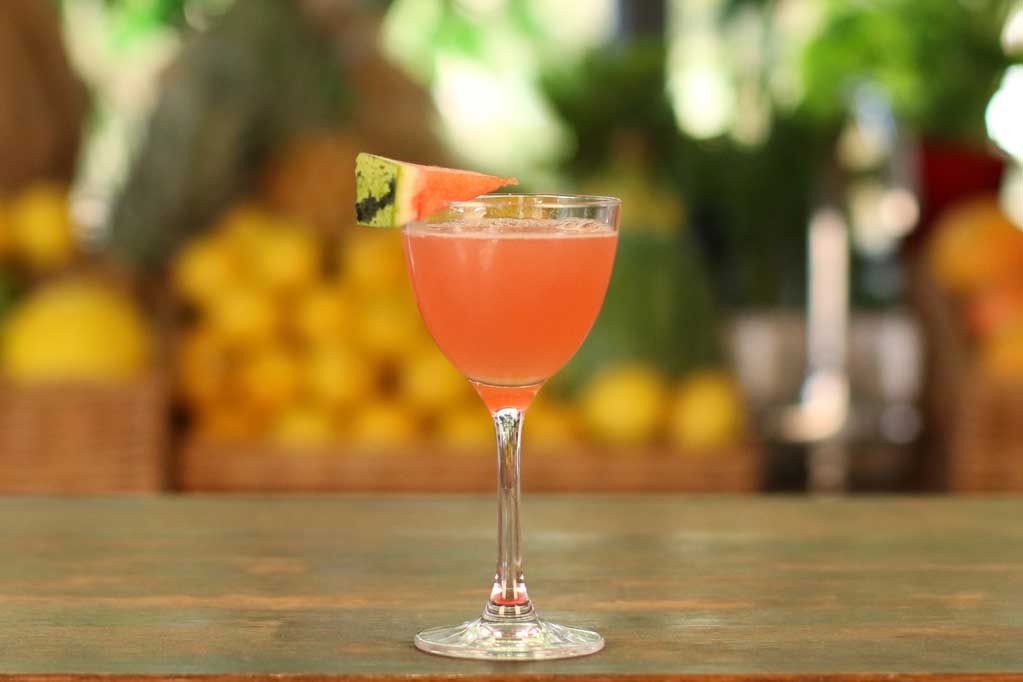 The Watermelon Martini is another spin on the classic drink, that utilises fresh, muddled watermelon to lend a light, fruity exoticism to the finished product.

Take your Boston glass or small tin and add the watermelon chunks to the shaker.

Using your muddler, muddle the watermelon until it is mostly liquidised.

Using your jigger to measure, add the vodka and sugar syrup to the shaker.

Using your Mexican elbow and a jigger to measure, squeeze 12.5ml of lemon juice and add it to the shaker.

Fill the shaker with cubed ice and seal using your Boston tin or lid, before shaking vigorously for 10-15 seconds or until your tin is very cold.

Garnish with a thin wedge of watermelon, cut so it sits on the edge of the glass.

Watermelon has been a natural addition to fruity cocktails for years, the high water content and low amount of fibre in this deliciously sweet fruit make it perfect for blending into drinks and this simple, vodka-sour style Martini drink is a great way to showcase the flavour of the watermelon and balance out its sweetness.

As to who first paired watermelon and vodka or where it first occurred there’s not much information to go on, with bartenders and amateur mixologists combining the fruit with some form of booze for about as long as it’s been readily available.

According to Difford’s Guide the cocktail is thought to have emerged in London during the 1990’s and may have been created at The Met Bar.

Unusually, watermelons are both a fruit and a vegetable. Thanks to their sweet taste they’re often thought of as fruits and do grow like fruit, originating from flowers pollinated by bees.

Botanically speaking, they are technically a fruit as they grow with their seeds on the inside, but watermelons are classified as being a part of the gourd family of vegetables alongside pumpkins, squashes and cucumbers and are the official state vegetable of Ohio.