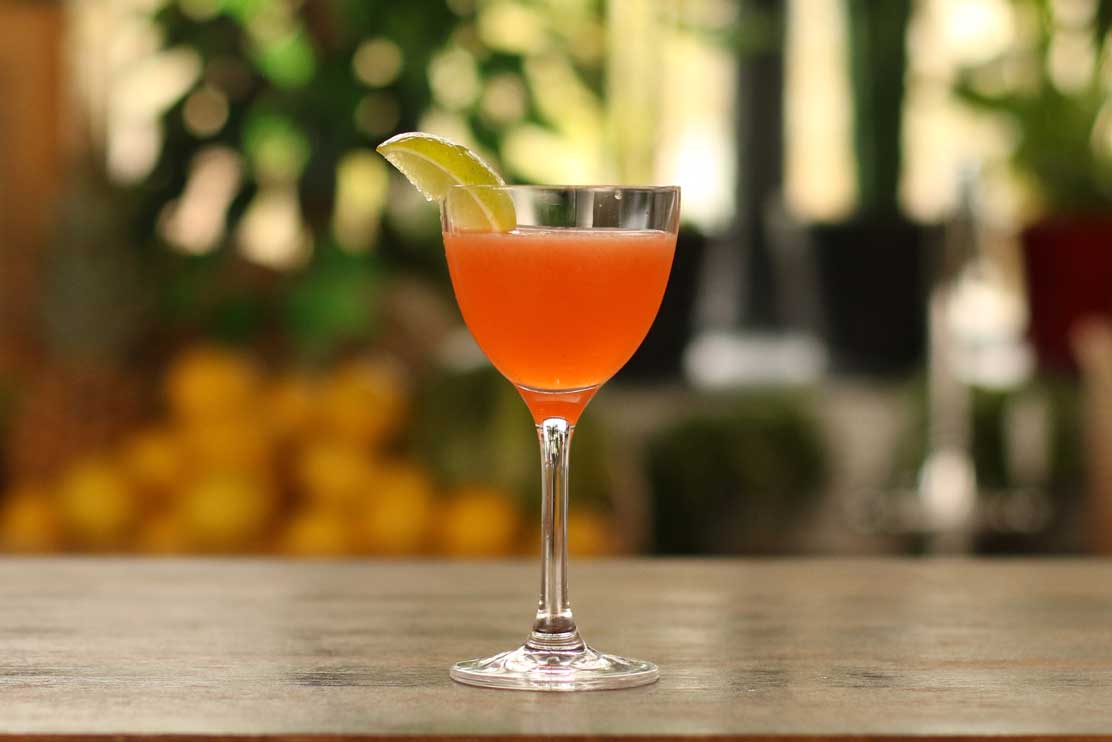 This fruity twist on the classic is created by simply adding a splash of strawberry puree to a standard Daiquiri and lowering the sugar a little to balance the sweetness.

Take your Boston glass or small tin and, using your jigger to measure, add the rum and strawberry puree to the shaker.

Using your bar spoon (5ml) to measure, add the sugar syrup to the shaker.

Using your Mexican elbow and a jigger to measure, squeeze 25ml of lime juice and add it to the shaker.

Garnish with a fresh strawberry, cut so it sits on the edge of the glass.

Whilst the history of the classic Daiquiri is incredibly well-recorded and widely agreed upon, where and when someone thought to add strawberries to the mix seems to remain a mystery. This is certainly not a new invention, this much is certain. Strawberry Daiquiris have been a popular twist on the classic for at least half a century, ranging from simple shaken Daiquiris with the addition of fresh, muddled strawberries through to frozen, blended cocktails with artificially coloured syrups and swathes of garish sugary liqueur.

We can make a pretty safe guess, though, that the Strawberry Daiquiri might have come from ‘the cradle of the Daiquiri’ and perhaps the most famous purveyors of this drink, La Floridita in Havana, Cuba. The bar, which was a particular favourite drinking-hole of author, Ernest Hemingway, was for more than 30 years the home of legendary bartender Constantino Ribalaigua. Ribalaigua didn’t invent the Daiquiri but was certainly responsible for its fame and fortune. He was the progenitor and the very first to serve the drink blended, over shaved ice, as a frozen Daiquiri and subsequently coined many twists on the classic drink including the infamous, Papa Doble or Hemingway Daiquiri, an extra strong version of the drink designed especially for the author. With all his experimentation, it’s safe to assume that fresh strawberries may have made their way into one of his recipes at some point.

This drink has now found a new spiritual home, albeit as a slightly bastardised version of the original, in New Orleans. The famously hot and sticky Louisiana city is known for its cocktail connoisseurism and in the last few decades the daiquiri has reigned supreme as by far the most popular cocktail for Nola natives.

The New Orleans Daiquiri is a far cry from the sophisticated sour-style cocktails of old though, these frozen drinks are flavoured with various fruit juices—Strawberry being a particular favourite— laden with high-proof rum and served in huge take-out style polystyrene cups. In uniquely American style, these super-sized Daiquiris are most often served at little roadside joints, most of which boast drive through windows.