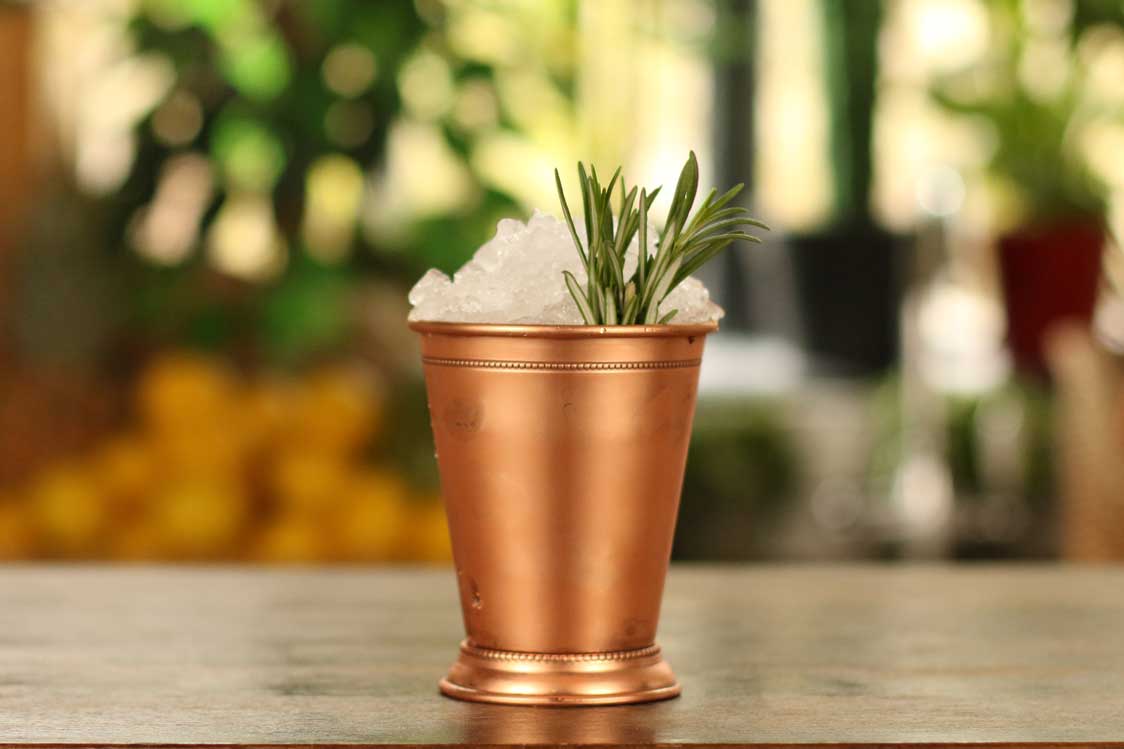 This particular incarnation of a Pineapple Smash is our own recipe, but the drink belongs to a broad family of cocktails closely related to the Julep. Our smash combines pineapple, lemon, rosemary, vodka and sugar to create a sweet but complex drink which is fruity and refreshing.

½ A Sprig of Rosemary

½ A Sprig of Rosemary

Take your Boston glass or small tim, and place the pineapple chunks, lemon wedges and rosemary leaves at the bottom of your tin.

Using your muddler smash the fruit and rosemary into a pulp.

Using your jigger to measure, add the vodka, pineapple juice and sugar syrup and then fill your tin to the top with crushed ice.

Covering the top of the tin with your hand to stop any debris flying out, use your bar-spoon to mix the ingredients and ice. Make sure to scoop all the fruity pulp from the bottom of your tin up and into the rest of your drink.

Mix for 10-15 seconds, or until your tin is cold and some of the ice has melted making your drink more liquid-y.

Cap your drink with a scoop of crushed ice, piled on top and formed into a dome using your hand.

Garnish with the remaining half of your rosemary sprig and serve with a straw.

Fold a napkin into a triangle and wet the corners to stick them to the outside of your tin, giving the drink a little jacket to keep your hand from getting too cold.

One of the first written recipes for a Smash or Julep-type cocktail appears in Jerry Thomas’s famous How to Mix Drinks or The Bon-Vivants Companion, published in 1862.

Thomas doesn’t mention the Smash by name but clearly lays the groundwork for the drink with his Mint Julep, which he refers to as, “a peculiarly American beverage.” Thomas states that a “real mint julep” must be made from a dozen fresh mint leaves, a spoonful of white sugar and “equal parts peach and common brandy,” topped with crushed ice. Thomas acknowledges that there are many variations on the cocktail and today the classic Mint Julep is generally thought to use bourbon in place of the two brandies. This may be due to the drink’s association with the Kentucky Derby, where it is served every year, with Kentucky being the home of bourbon.

In 1930 the Smash was briefly mentioned in Harry Craddock’s Savoy Cocktail Book. Craddock has little to say on the drinks but does relate them to Juleps saying that “The ‘Smash’ is in effect a Julep on a small plan.” The brief description is accompanied by a recipe for what is essentially a short Julep, calling for a “short glass” and allowing for a wide selection of spirits depending on the drinkers preference.

Although mint tends to be used in a lot of Smashes, it can be substituted with other herbs or the herbs can be left out entirely. Whilst all Smashes contain fruit, some recipes call for it to be strained out before serving and others use it only as a garnish.

While some cocktail purists will say a Smash must be served long or must include crushed ice, there are plenty of examples of Smashes that are strained and served short or poured over cubes. So don’t be bogged down by traditionalism, a Smash leaves room for you to get creative and work towards your personal tastes.