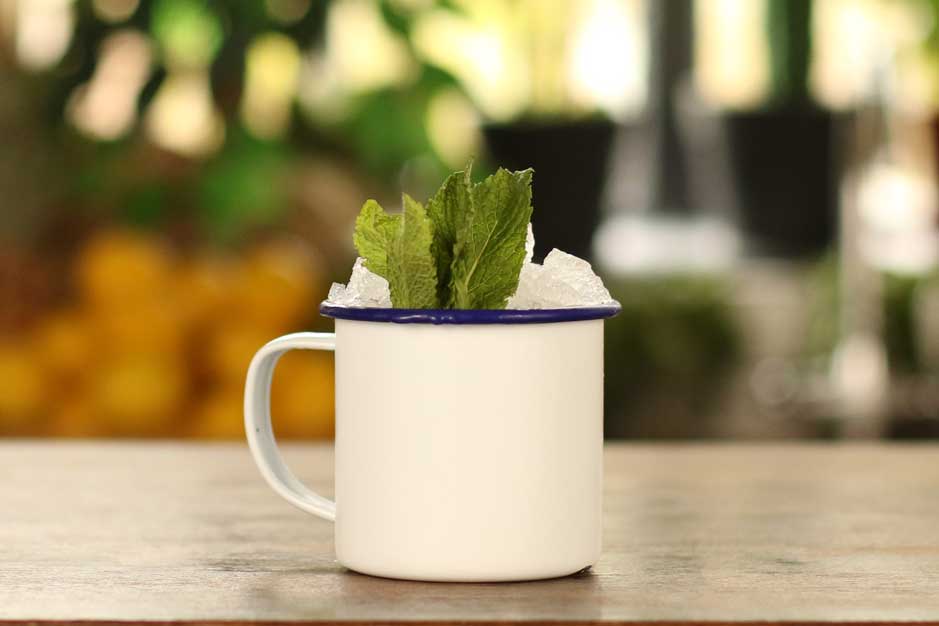 Fresh mint mixed with sugar syrup and rich caramel-y bourbon, served long over crushed ice, the Mint Julep is great all year round.

Strip a large handful of mint leaves from their stems and give the mint one hard clap between the palms of your hands to release the oils and awaken the flavours before adding to your tin.

Using your jigger to measure, add the bourbon and sugar syrup to the tin.

Fill the tin with crushed ice and, using your bar spoon, churn the drink, making sure to scoop all the mint and ingredients up from the bottom of the glass to combine them.

Stir for 10-12 seconds or until some of the crushed ice has melted and the ice level of the drink has gone down a little.

Top with a pile of crushed ice and use your hand to form it into a dome and garnish with a mint sprig and a straw.

Fold your bar napkin in half diagonally and wet the outside corners. Stick the wet napkin corners to the outside of the tin to give your cocktail a little jacket.

Whilst the Julep was most likely created in the southern United States sometime during the eighteenth century, it’s name comes from the Spanish ‘julepe’ which comes from Spanish-Arabic and means ‘rose-water.’ This may be a reference to the Middle-Eastern culture of infusing herbs and sugars in water or spirits.

The traditional Mint Julep is a semi-sweet cocktail served over cracked ice, churned and muddled with fresh mint. It has refreshing, herbaceous qualities and some dark, dried fruit and molasses undertones from the bourbon. The Julep may originally have been a drink that was used as a vehicle for medicine, and has written references to curing ‘sickness in the stomach’. The Julep was also enjoyed with gin or brandy as a base spirit. Nowadays, the Julep is synonymous with the Kentucky Derby.