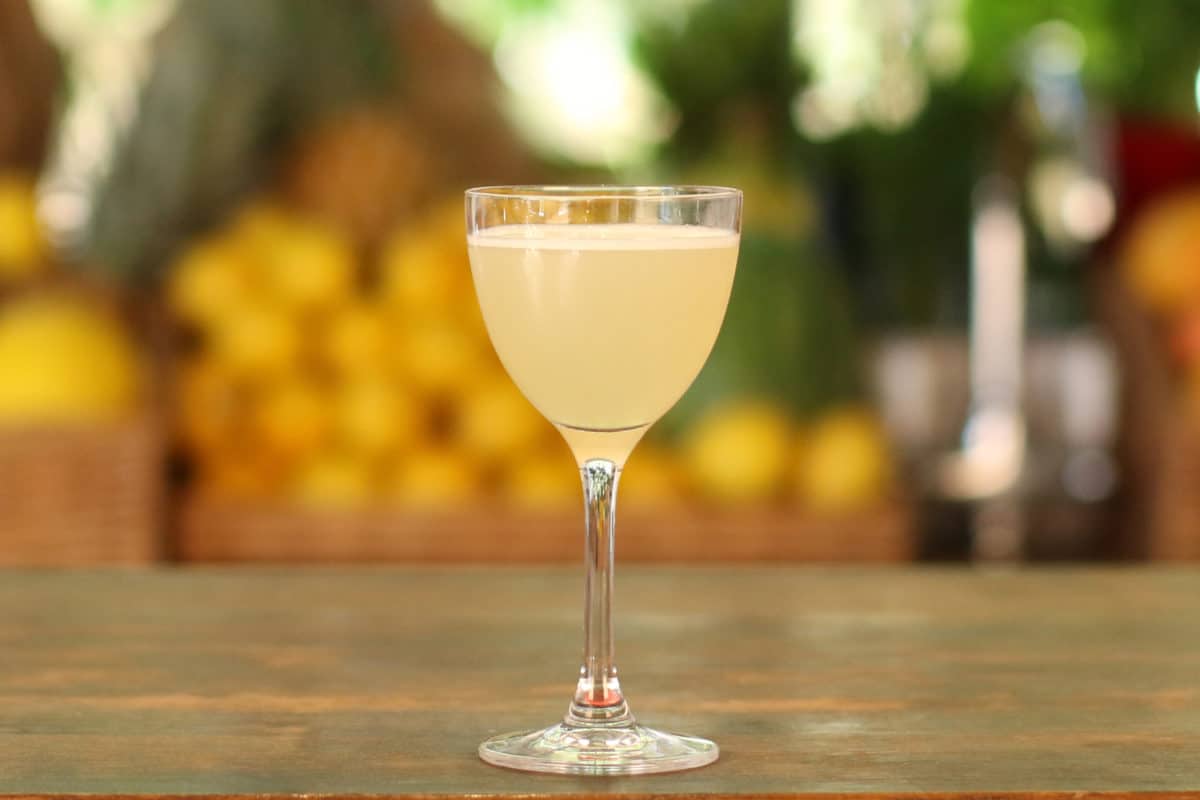 This autumnal twist on a Martini features a classic combination of apple, lemon, vanilla and cinnamon, balanced with the icy dryness of vodka. The Vanilla & Apple Martini is warm, spicy and subtly tart, making it a brilliant choice for a wintery bar hire.

The Vanilla & Apple Martini is yet another spin on the most famous cocktail, the Martini.

With its light citrusy notes, this is a far cry from the original, but using classic flavour combinations—vodka and apple, apple and cinnamon, lemon and vanilla—it retains the balance and elegance of its forebear.

Martinis come in all sorts of colours and flavours, what unites this wide family of cocktails is their base spirit—nearly always vodka or gin, and their eponymous vessel; the Martini glass. With such diversity its entirely possible to design a whole menu around this celebrated style of cocktail, with drinks ranging from fruity and sweet, to citrusy and tart all the way to strong and devilishly dry, there is a martini to suit everybody’s tastes.

With its warm apple-pie spice, the Vanilla & Apple Martini makes a great choice for an autumn or winter bar hire, the cinnamon gives it a subtle christmassy note and its natural elegance make it perfect for a glamorous winter event. There are a host of other winter-warmer cocktails that could be served alongside the Vanilla & Apple Martini, some of our favourites include the Maple Leaf; a short, smooth mixture of rich bourbon and maple syrup, or the Sidecar; an old French classic combining cognac and spiced orange liqueur.

Martinis are a popular and stylish drink for a bar hire but they do tend to be quite strong, the Vanilla & Apple Martini is lower in alcohol than many of its cousins so it’s a good choice to round out a heady Martini menu. You could always consider serving some beers, low alcohol, or even alcohol free cocktails alongside your Martinis as well, with loads of great mocktails and classically styled high-balls that could match the poise of the Martini.

If you’re eager to serve a Vanilla & Apple Martini at your bar hire and want to know more about what drinks you could feature alongside it, be sure to speak to your event organiser, or check out some other vodka based, wintery and Martini-style cocktails from our list.

This particular recipe is a house creation but by no means were we the first to make an apple and vanilla flavoured Martini. This classic flavour combination has certainly been paired together many times before at bars all over the world in some form or another and the balanced mixture of tart, citrusy apple and sweet, mellow vanilla with a hint of cinnamon spice, is a delicious and nostalgic taste to base a drink on.

Apple Martinis are nothing new, often dubbed the ‘Appletini’ this drink dates back to at least the late 80’s or early 90’s where recipes for some form of Apple Martini began to appear alongside an apple-flavoured schnapps produced by Dutch brand, De Kuyper, called Apple Pucker. In 1993’s Complete World Bartender Guide, writer, Bob Sennet, lists an Apple Martini as: 1 part each of vodka and De Kuyper’s apple liqueur shaken and served straight up, this liquor-only cocktail would have been pretty heady, more in line with a classic Martini but not necessarily to the taste of general drinkers. Over the years since, the standard recipe has evolved to include lemon juice and sugar to help balance out the strong liquors.

The first recorded use of the now common term, ‘Appletini’ is hard to discern but most agree that the drink was popularised in Los Angeles with many attributing its official creation to West Hollywood restaurant, Lola’s.

Though wikipedia attributes the creation of the ‘Appletini’ to Lola’s restaurant in LA, it didn’t feature on their menu until 1996, 3 years after the Apple Martini recipe was printed in Bob Sennet’s Complete World Bartender Guide.

When the drink first appeared on lola’s menu it was listed as an ‘Adam’s Apple Martini’, supposedly named after the bartender who created it, named Adam, when the term ‘Appletini’ arose seems to be a mystery.

In 2000 the NY Times published an article by writer Rick Marin entitled, The Greening Of The Martini, Marin’s article detailed the recent rise in popularity of this drink from its beginnings in LA’s sushi restaurants to its de and subsequent re-construction in chique New York cocktail bars, by way of Robert De Niro:

“City Hall, in TriBeCa, started serving apple martinis a year and a half ago, after Robert De Niro came in asking for one and the bartender was unable to oblige. The next day, the owners ordered a case of DeKuyper Sour Apple Pucker, a 30-proof bright green liqueur advertised on the label as ”sweet and sour schnapps.””

The Appletini (easy on the tini) is famously the favourite drink of TV Doctor John ‘JD’ Dorian, from US sitcom, Scrubs.

For vodka cocktails, it’s always worth using a classic, dry vodka like Stolichnaya or Wyborowa, these rye based vodkas from Russia and Poland respectively, both have a smooth, dry, almost imperceptible flavour, especially when served ice cold.

These vodkas are perfect for cocktails and fairly inexpensive when compared to many premium-vodka brands whilst still being of the highest quality.

Combine all ingredients in a shaker and fill with cubed ice.Shake vigorously for 10-15 seconds and double strain. Use a blowtorch to flame cinnamon over the cocktail before serving.