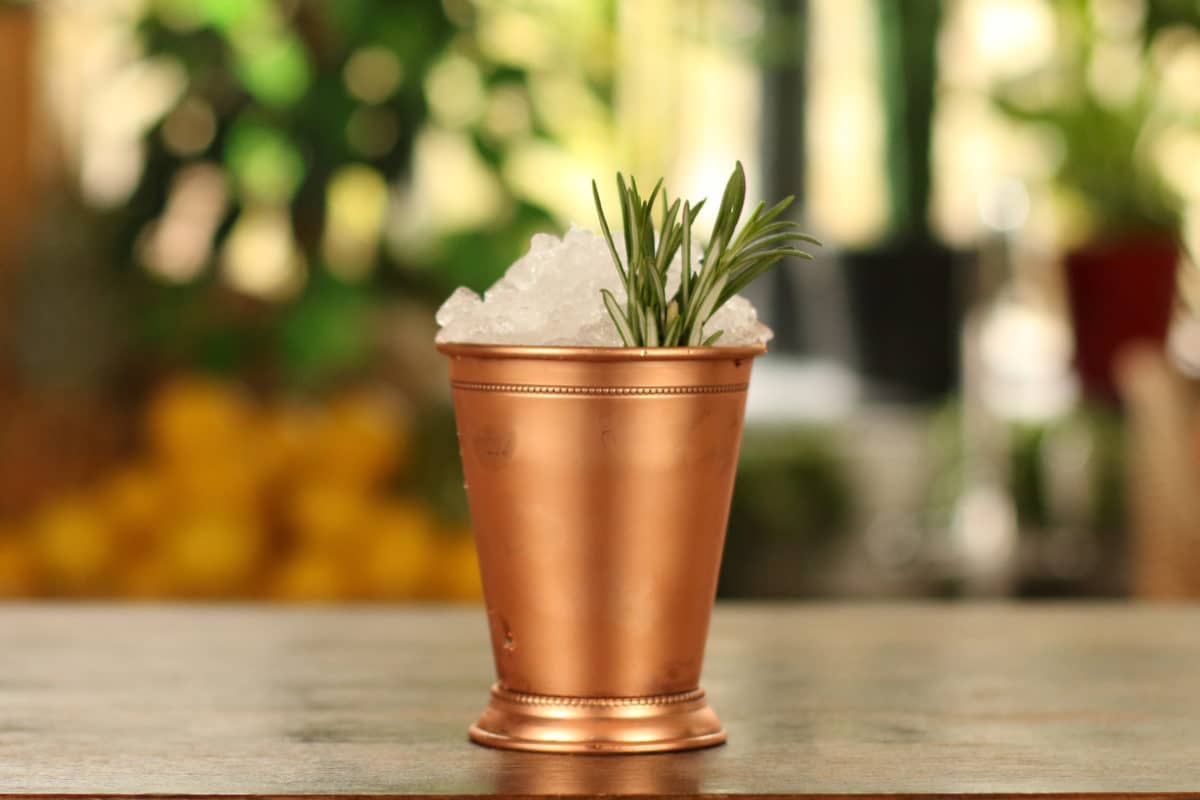 This particular incarnation of a Pineapple Smash is our own recipe, but the drink belongs to a broad family of cocktails closely related to the Julep. Our smash combines pineapple, lemon, rosemary, vodka and sugar to create a sweet but complex drink which is fruity and refreshing.

The Pineapple Smash is a great summery, fruity cocktail, and perfect for those who like their drinks to taste a little less boozy. It works brilliantly as part of a vodka based menu or a tropically-inspired fruit-based selection.

For those looking to include some stronger tasting vodka drinks with the Pineapple Smash for their mobile bar hire you may want to consider a Vodka Martini, which combines vodka and vermouth for a dry, slow-sipping cocktail. Martinis can be served with a slice of lemon peel or an olive and can include a splash of olive brine to make a Dirty Martini.

For those looking for a tropical or fruity menu there are loads of options. Tiki cocktails are great fruity drinks for a summer event and something like a Mai Tai or a Hurricane may be a great addition to an exotically-styled menu featuring the Pineapple Smash.

As the Pineapple Smash uses crushed ice, you may want to consider including some other smash or julep style cocktails on your menu as a lot of the ingredients and equipment needed to make them will also be the same. The Mint Julep is a great classic option and combines the refreshing feel of a long drink with the sophistication of a whiskey cocktail, perfect for the more discerning amongst your guests.

If you’re eager to compile a menu including the Pineapple Smash, be sure to speak to your event organiser about your options or check out some other vodka-based, fruity, or julep-style drinks from our list.

One of the first written recipes for a Smash or Julep-type cocktail appears in Jerry Thomas’s famous How to Mix Drinks or The Bon-Vivants Companion, published in 1862.

Thomas doesn’t mention the Smash by name but clearly lays the groundwork for the drink with his Mint Julep, which he refers to as, “a peculiarly American beverage.” Thomas states that a “real mint julep” must be made from a dozen fresh mint leaves, a spoonful of white sugar and “equal parts peach and common brandy,” topped with crushed ice. Thomas acknowledges that there are many variations on the cocktail and today the classic Mint Julep is generally thought to use bourbon in place of the two brandies. This may be due to the drink’s association with the Kentucky Derby, where it is served every year, with Kentucky being the home of bourbon.

The Smash went on to appear in various forms throughout the late 19th and early 20th century. Harry Johnson includes four recipes for Smashes in the 1888 edition of his New and Improved Bartender’s Manual. In his guide, Johnson distinctly separates Smashes from Juleps but doesn’t elaborate much on the subject. His recipes included an “Old Style Whiskey Smash” and a “Fancy Whiskey Smash” Johnson does not specify the fruit included in his Smashes, suggesting only that in-season fruit is used.

In 1930 the Smash was briefly mentioned in Harry Craddock’s Savoy Cocktail Book. Craddock has little to say on the drinks but does relate them to Juleps saying that “The ‘Smash’ is in effect a Julep on a small plan.” The brief description is accompanied by a recipe for what is essentially a short Julep, calling for a “short glass” and allowing for a wide selection of spirits depending on the drinkers preference.

The exact definition of a Smash is pretty open to interpretation. Whilst it has to be a combination of fruit, liquor and ice, past that there aren’t a huge amount of rules to making smashes.

Imbibe magazine states that thing to remember is; “a Smash is always a Julep but a Julep isn’t always a Smash.” These drinks tend to be associated by their method and serving, generally containing fruit and fresh herbs which are muddled or smashed, combined with the liquor of choice and mixed using crushed ice in a metal cup, in which the drink is served.

The metal cup or Julep tin is most closely associated with the Mint Julep, the first instance of which appeared in Jerry Thomas’s How to Mix Drinks in 1862. It’s not essential to serve a Smash in a tin but all Smashes certainly include fruit and crushed ice. Perhaps the most well known and quintessential Smash is the Mojito, a famous mixture of limes, mint, sugar and rum.

Although mint tends to be used in a lot of Smashes, it can be substituted with other herbs or the herbs can be left out entirely. Whilst all Smashes contain fruit, some recipes call for it to be strained out before serving and others use it only as a garnish. While some cocktail purists will say a Smash must be served long or must include crushed ice, there are plenty of examples of Smashes that are strained and served short or poured over cubes. So don’t be bogged down by traditionalism, a Smash leaves room for you to get creative and work towards your personal tastes.

As this particular Pineapple Smash is a house recipe there aren’t really any references for it, there are however, various ‘Pineapple Smash’ recipes throughout the web. Spirit and wine distributors Palm Bay list a recipe for a drink which rather confusingly, is called the Brandy Pineapple Smash despite the fact it contains rum and no brandy.

Perhaps the closest cousin we could find to our own Pineapple Smash was a recipe for a Pineapple Rosemary Smash we found on food and drinks blog, Cake ‘n’ Knife. Writer, Meghan Y, lists her drink as a whiskey smash with muddled pineapple and rosemary simple syrup and says she took inspiration for her recipe from The Dead Rabbit book which features a rosemary and pineapple recipe:

“The pineapple rosemary combination caught my eye and then my mind went into overdrive to make a simple version that anyone could make. The rosemary simple syrup is the key to this recipe and it’s herbaceous flavor. The pineapple is just the right bright note to really mellow out the rosemary flavor and sweetness with a little tartness.”

The pineapple smash is all about the sweet tropical flavour of the pineapple, the sharpness of the lemon and the earthy depth of the rosemary. Vodka, the spirit of choice for our pineapple smash, can be added to fruity cocktails to give them a boozy kick without affecting the flavour. Vodka’s advantage lies in its neutrality and to achieve the best and smoothest tasting vodka cocktail it’s important to use a clean, high quality vodka to avoid any harsh alcoholic notes.

We use Stolichnaya, the classic Russian vodka, distilled from wheat and rye grain. Stolichnaya has been a top choice for mixologists since it became widely available to the international market in the early 1950’s and this smooth Russian vodka is still hugely popular today.