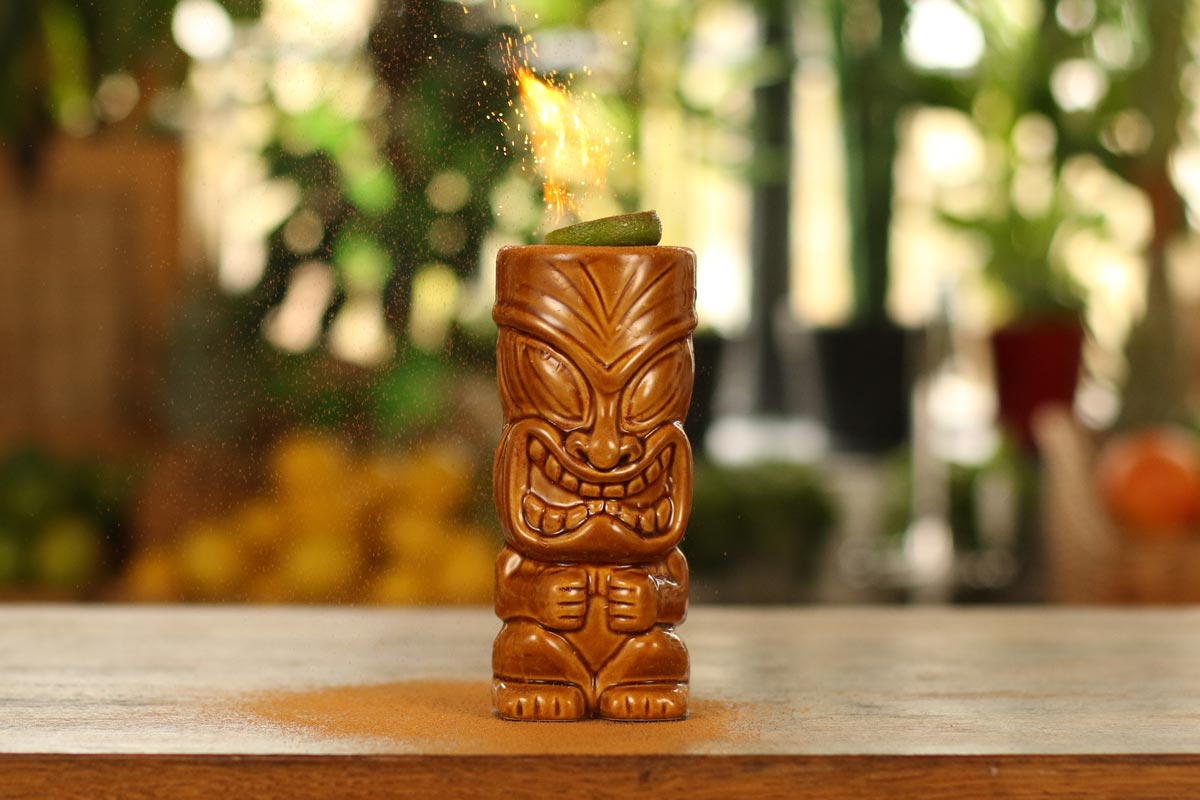 Tiki drinks are a great choice for anyone who wants a fruity taste of the tropics as part of their mobile bar hire.

Many tiki cocktails though, including the Hurricane are known for their alcoholic strength but mild flavour, this means tiki drinks can be particularly potent and you may want to offset a drink like a Hurricane with some lower-alcohol alternatives.

Thankfully, due to their high fruit content, it isn’t hard to produce low or even no-alcohol tiki drinks to help balance out your menu. A classic fruity concoction like a Sex on the Beach or a Bahama Mama may make a good lighter option for a tiki based menu.

You may even want to include some tiki-style mocktails on your menu, a refreshing way to offset the high-alcohol offerings like the Hurricane.

Be aware that a hurricane requires quite a lot of ingredients and can take longer than a lot of other cocktails to make, when including this drink in your menu you may want to consider adding some simpler, quicker-serving cocktails to help regulate service and keep your guests’ glasses full.

Our Hurricane uses Velvet Falernum, a rum-based, spiced liqueur from Barbados, one of the main flavourings in this liqueur is almond, if you have any guests who are allergic to nuts or are worried about allergens, speak to your event organiser and they can arrange alternative ingredients and make sure your bar staff are informed of any allergies.

If you’re looking to create a menu including the Hurricane for your bar hire and want to know more about your options for other cocktails to go alongside it, be sure to speak to your event organiser or check out some other rum-based, tropical fruit, or tiki-style cocktails from our list.

The drink shares its name with the eponymous ‘hurricane glass’ in which it is most often served. The glass features a tall fluted bowl which flares at the top, sat upon a short, thick, ball-shaped stem.

The Hurricane’s creation is credited to a New Orleans bartender named Pat O’Brien who ran a speakeasy called Mr. O’Brien’s Club Tipperary, the password to enter the club was allegedly “Storm’s a brewin’.” When O’Brien was left with a surplus of rum and wanted to replace it with more popular spirits like gin and Scotch whisky, he created the Hurricane to help him shift the extra stock, the drink caught on and has been a New Orleans staple, and a tiki classic, ever since.

Pat O’Brien’s original recipe for the Hurricane was essentially just a passion fruit flavoured Daiquiri, replacing the usual white rum with a blend of white, dark and overproof rum, and substituting the sugar syrup for passion fruit syrup. Tiki drinks tend to evolve and change more than many other styles of cocktails though. During their heyday, tiki bartenders were protective over their recipes and other bar owners were eager to try and recreate them, this led to the many incarnations of different tiki drinks we’re left with today. Our hurricane adds fruit juice and Falernum liqueur to make for longer, fruitier version of this cocktail without skimping on the rum.

There is another cocktail known as a Hurricane which is native to the Bahamas, this drink features rum mixed with coffee liqueur, Irish cream and Grand Marnier and bares little resemblance to the classic New Orleans version.

The Hurricane is mentioned in cocktail writer and tiki historian, Jeff Berry’s, Beachbum Berry Remixed book. The book features a slew of tiki recipes as well as snippets of information about each drink, here is a little of what Berry had to say on the Hurricane:

“Whiskey was in short supply after WWII, while liquor distributors were awash with rum; their solution was to force bars to buy a case of rum with every Scotch purchase. The story goes that Pat O’Brien’s head bartender, Louis Culligan, came up with the Hurricane as a way to get rid of all that unwanted rum.”

The cocktail is also featured in Dale Degroff’s The Craft of the Cocktail. Degroff lists a wholly different recipe to Jeff Berry, including Galliano, orange and pineapple juices, Angostura bitters and replacing passion fruit syrup with passion fruit ‘nectar’. Degroff elaborates on his recipe and the history of the Hurricane:

“According to Brian Rea, there are two versions. The first was a drink of the early twentieth century that contained Cognac, absinthe and Polish vodka. The rum-juice combination appears to have surfaced at the 1939 World’s Fair in New York, at the Hurricane bar. I suspect that Rea is right – neither the drink nor Pat O’Brien’s appear in the 1937 Famous Drinks of New Orleans, by Stanley Clisby Arthur.”

Tiki cocktails are unusual in that they tend to be one of the only styles of cocktails to often feature more than one type of the same spirit.

It would be very rare to find a cocktail recipe that called for 3 types of gin or 3 different styles of whiskey but most tiki drinks combine at least 2 or 3 different types of rum.

Rum is a broad spirit, it is produced throughout the Caribbean and South America and varies hugely in taste and style depending on where it’s from. Each different style and brand of rum has its own particular flavour profile and mixing them together can make for a rich and complex mixture. The important thing to remember when making a rum blend is quality, you don’t want to mix a top shelf rum with a generic brand supermarket spirit. By keeping the quality of your rums consistent you’ll achieve a deep but balanced combination.

Our rum blend is a mixture of Captain Morgan’s dark rum, Mount Gay gold rum and Appleton Estate white rum, these three brands all originate from the Caribbean and each bring something unique to the blend. Captain Morgans has a sweet molasses flavour, Mount Gay has rich spicy notes of cinnamon and clove and Appleton white rum has the sharp, citrussy sweetness white rum is known for.

We also use Velvet Falernum in our Hurricane. Falernum is rum-based liqueur distilled in Barbados. White rum is diluted using sugar and water, and flavoured with rich Caribbean botanicals including lime-zest, ginger root, almond and other whole spices to create a spiced-citrusy-sweet liqueur.

The final touch for our Hurricane is the overproof rum, overproof refers to spirits which are over 50% ABV (you can see why this cocktail packs such a punch). We use Wray and Nephew Jamaican overproof rum, this famous rum brand began production in 1825 and it’s said that over 90% of rum sales in Jamaica are of Wray and Nephew.